I really wanted to see what all the fuss was about in this area and I certainly have! Adonis wasn’t so sure about driving anywhere near la Côte d’Azur, but we were so near that is was a shame not to. We have been suitable impressed by the gigantic yachts that must cost millions of pounds moored just off shore and close enough to swim to. I must admit that while I was enjoying a swim in the gorgeous warm Mediterranean sea, I was tempted to swim up to one of them and ask them for a refreshing, cooling beer, but I managed to control myself even though the famous jingle of “Two pints of larger and a packet of crisps, please” kept ringing in my ear. I wonder who owns these monsters of the seas and what you have to do in life in order to be able to afford one if you are not Royalty or a Hollywood star! The mind boggles… 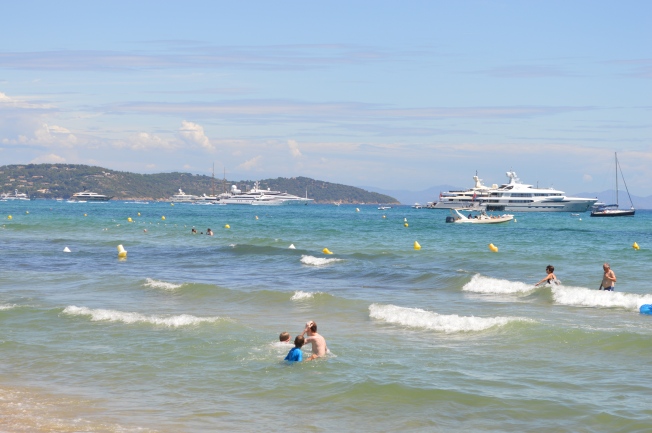 Close enough to swim to

We arrived here just before midday today after spending a very quiet and peaceful day a the France Passion site of Château des Demoiselles between Mui and La Motte, where we had a very warm reception by the hostess and where we did some Rosé and white wine tasting and, as usual, we walked away with half a dozen of their fine and refreshing product. We were told we could stop a couple of nights if we wanted (with plenty of shade at no extra cost) which was good to know, but we really wanted a water source for swimming and cooling off, so the obvious choice was to drive to the coast, a mere 12 miles away as the crow flies. We chose to come to this beach just south of St Tropez, hoping it would be a little quieter and not quite so manic as St Tropez itself or Ste Maxime to the north. 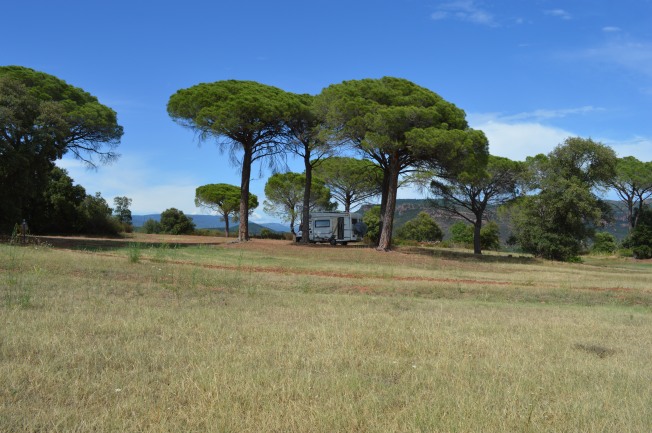 Plenty of space around us at Chateau des Demoiselles

The lovely and peaceful vineyard around us

Enjoying a walk through the vineyard

As expected and warned by the hostess at Les Demoiselles France Passion site, the moment we hit Ste Maxime the traffic slowed down to snail pace and we were bumper to bumper for about half an hour all the way to port Grimaud and les-marines-de-Cogolin, where we cut across on minor road D61 to Ramatuelle, a very pretty old town where we stopped for baguette and some Parma ham for lunch, as we are running low on supplies and need to stock up very soon. 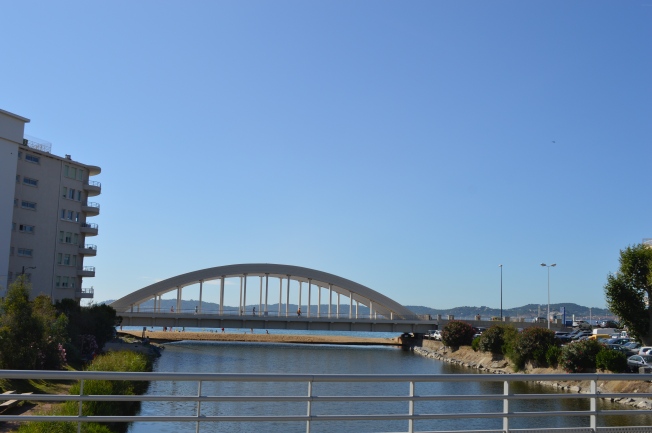 We did not enjoy our drive on D559 at all, even at 10am, as it was already becoming unbearably hot, but it is the only and compulsory route between Ste Maxime and St Tropez. As the traffic was so painfully slow, I did manage to snap a few shots of the towns, which I think might be quite good.

Beano is not having a good time of it either, as I don’t think this intense heat really agrees with him and he’s had a runny tummy to boot. Goodness know what he’s scoffed down!

Trying to keep Beano cool swimming in the Med!

The traffic did ease out after Cogolin and I really enjoyed walking in the charming town of Ramatuelle, even though I didn’t have much time, as Adonis and Beano were waiting in the van on top of the hill in the baking sun.

We were lucky to get in this very busy aire, only 200 metres away from the beach, and were very happy to pay the €8 for the day, as it has water, toilets and cold showers (very welcome in this heat). It is also a very pleasant walk on the sandy path to the beach and we even have room to put out the awning! 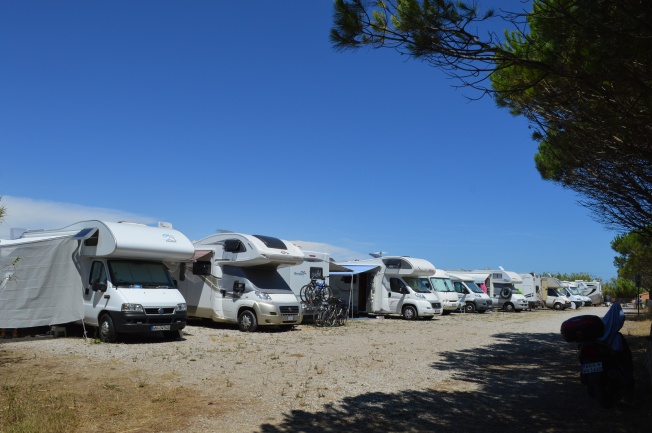 The motorhome aire 200 metres away from Pampelonne beach!

Our pitch at the motorhome aire: just about enough space for awning!

We have decided against going any further east and into Italy due to the awful traffic, so we’ll be going west again towards Portiragnes in the Herault Department to visit Adonis’s parents. Not sure where we’ll be staying tomorrow yet. Qué será, será…?