Charming Le Crotoy – Let the light speak for itself

This is our last day of this superb summer holiday and we can’t think of a better place to spend it than at this jewel of a fishing town on the bay of the Somme. Another regular in our travels, it never ceases to charm and delight us in equal measure and yet, every time we see it, it seems to be different, perhaps due to that brilliant light reflected on the water changing with the seasons.

I never tire of looking at this view 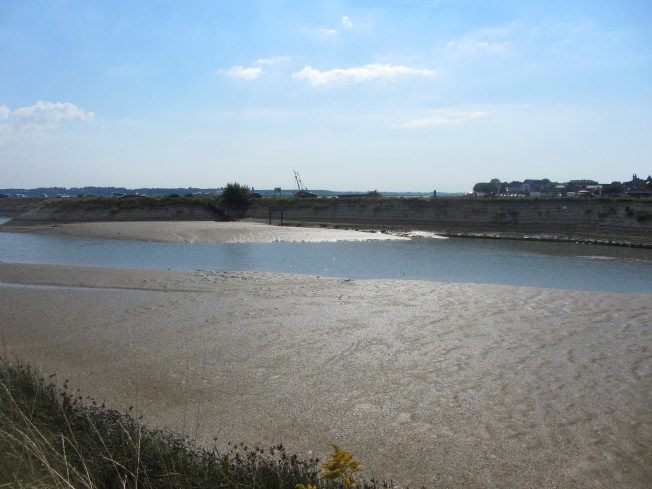 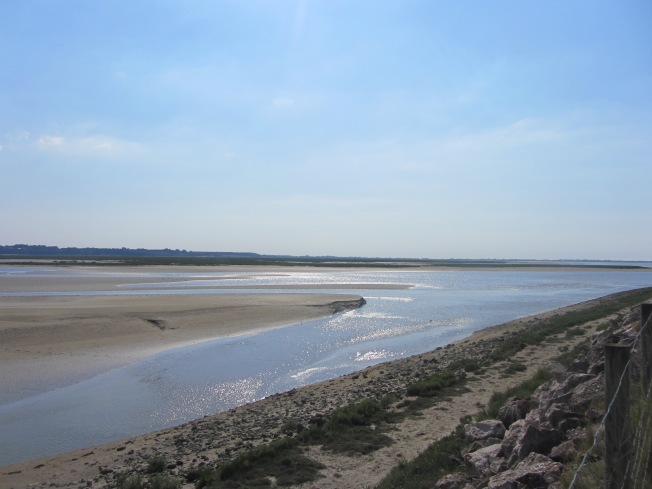 The wonderful motorhome aire right on the bay still only costs €5 a day and the borne for water and electricity €2, which we don’t need. This is the ideal spot to set off for long walks around the bay, along the beach or into town. We have done all these and today it seemed a bit sad not to have a dog with us to join us in our rambles, but still very enjoyable all the same.

The motorhome aire, right of the Bay of the Somme 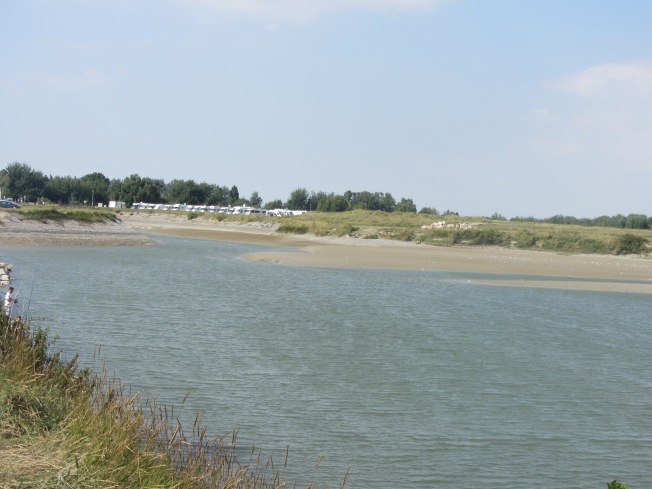 Motorhome aire from a distance on the Bay

One of the aspects we like the most about this town is all the various fish restaurants and today we decided to treat ourselves to a nice meal out, being our last day and all. So we went to the popular ‘Le Saint Pierre’ (pure coincidence, of course) on 30 Quay Courbet, right on the sea front and where everything is happening. We had some delicious mussels in Roquefort sauce followed by king prawns, all very fresh and served in very generous portions. Adonis couldn’t really manage the king prawns, so all the more for me! All that, with a bottle of Muscadet, a coffee and a cognac only came up to €44.50, and what a perfect way to finish the holiday!

Yesterday, we spent the day at equally quaint and picturesque Broglie, just south of Bernay in the Eure Department, where I enjoyed a stroll along the aquatic gardens and, even tough most of the plants are coming to the end of their flowering period and glory, it is still a very pleasant, charming and relaxing way to spend half and hour or so.  The aire here still stands at €5, plus a borne for water which operates with a token (jeton) for €2.50 to be bought from the Mairie or from the caretakers who come round to collect the daily fee in the evening.

Magnificent Broglie, from the Aquatic Gardens 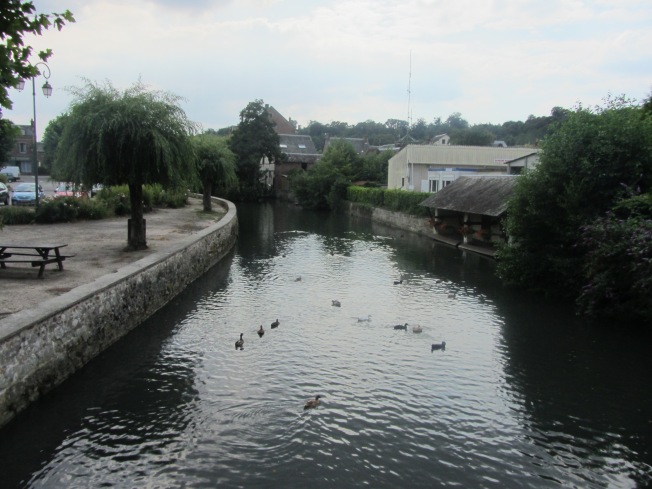 We are going home tomorrow, 2 days earlier than planned, in order to pick up our new puppy, Beano, a Jack Russell Terrier born on 24th June. It is always nice to have something special to look forward to after a marvellous holiday.

My first entry of the year happens to be on the Bay of the Somme on a misty, but warmish afternoon.  The thermometer in the van reads 17 °C and, as we haven’t had the heating on since 1.30 pm and it’s 4.45 pm now, the temperature inside can’t be very different from the outside.

Motorhome aire as seen from the Bay of the Somme

We’ve just come back from a long walk with Sasha around the bay and the marshes and Sasha had a whale of a time leaping about, chasing the seagulls and the ducks.  I took lots of pictures all the way as I never tire of the beautiful sight of the town of Le Crotoy from the motorhome aire and the marshes. 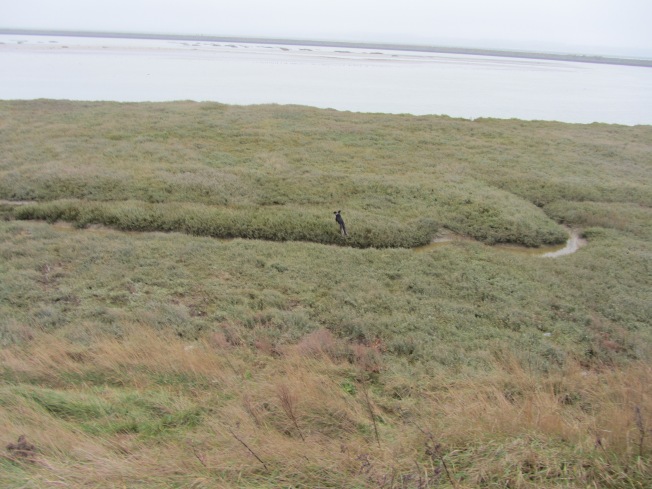 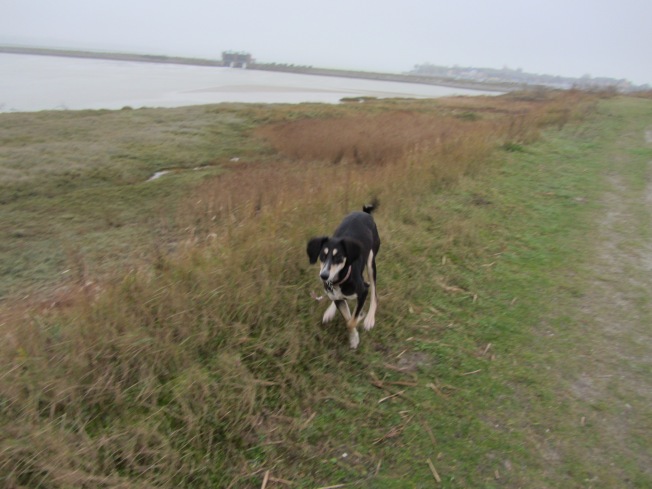 Enjoying a long walk and a run around the Bay

The aire still costs €5, plus €2 for the water and electricity borne if needed.  There are 8 vans here at the moment and it’s hard to imagine now how busy it was in the summer, with hardly any spaces left, even though the parking area is quite big, with room for 200 vehicles!

The Bay of the Somme 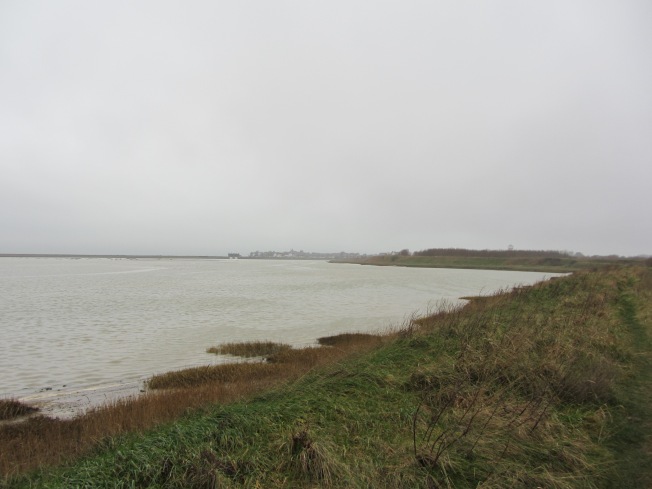 The Bay of the Somme and Le Crotoy

We thoroughly enjoyed our break at Amboise, as always, and left on 1st January for Montbizot, north of Le Mans, following mainly the D938/338 from the north of Tours.  Montbizot has a little aire with enough room for 6 motorhomes, but the water and electricity supply borne was switched off for the winter, but as we had topped up in Amboise, it didn’t really matter.  Again, the river Sarthe was overflowing and the walking area and path were waterlogged and flooded in parts, so walking was difficult and Wellington boots were a must!

After Montbizot, we carried on north on the D338 past Alenҫon and D438 to Broglie, where once again we had made an appointment with the vet to have Sasha wormed and checked before returning to England.  The guard came early in the evening to collect the €5 fee and we also bought a jeton (token) for water for €2.50 to last us until the end of the journey.  We were glad to see that everything was in working order.

It felt very strange this time round not to have Bramble with us, as we’ve been here so many times with him, especially during the walk along the Charentonne river.  Even the vet asked about him.  Still, Sasha loved the walk too and I hope it will be the first of many happy walks in this lovely village.

The vet was booked for 8.30 am, so we made an early start this morning and got here for 12.30 pm, following the A28, joining it at junction 14 north of Bernay and on past Rouen, but we had to take the A150 for a little while as the bridge was still closed on the Eastern side of the city and the traffic was diverted westwards.  We joined the A28 again at J.11 and followed the usual route past Abbeville to J.1 and D40 to Le Crotoy without any further disturbances to the traffic.

Various aquatic birds at the Bay of the Somme

We are off to Auchan at Boulogne-sur-Mer for our final big shop to stock up on wine and beer before our final overnight stop at Wissant and going home.

We’ll be back in February!

Our parking spot at the motorhome aire of Le Crotoy